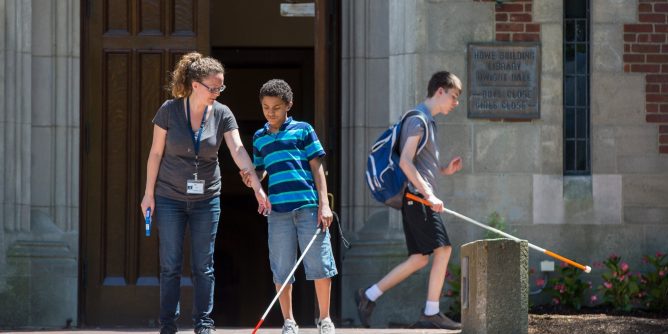 I had a disturbing encounter today. My caregiver dropped me at the hospital curb for Physical therapy and as I was walking through an automatic door I’ve walked through a million times, I felt someone gently grabbing my arms from behind at the same time I heard a male voice saying “you’re okay….just go a little to the left”. It really startled me and I tried to see where the voice was coming from, but the man was totally out of my field of vision. I guess to him, it looked like I was going to walk into the wall, but I wasn’t. I was mostly just trying to get through the large automated sliding door without hitting anyone with my cane. The man continued to hold onto my arms and “helped” me until I got to the elevator. It was very odd as I know he meant well, but grabbing me from slightly behind me scared the beggeezes out of me as it made me realize how vulnerable I am. It also strikes me how little people understand about the degrees of visual impairment and how much work we must do in order to educate the general public on how to interact with people with visual impairments. But how do we communicate this?

I’m probably over analyzing the incident, but it got me thinking about what I would do if his intentions were not good. I’m pretty small and although I’ve gotten much stronger through PT, the fact is that I have had 4 spinal fusions and 3 shoulder replacements leaving me pretty weak compared to most people. Add that to the diminished eyesight and I’m trying not to be scared to walk in public places by myself. I am left now with trying to figure out what I will say to the next well-meaning stranger to let them know I am okay without being rude.

TENAYSHUS (Tenacious Blind Girl) is a retired Registered Nurse who needed support following her diagnosis of Retinitis Pigmentosa, one of many conditions that cause low vision. When she could not find a support group, she learned web design to build LowVisionSupportGroup.com to help others impacted with Low Vision. The site was created using accessibility-ready web authoring tools.
Twitter Facebook Linkedin

My Workers Compensation Nightmare
Admin 2001-07-10 0 Comments
Have you ever thought about what would happen if you hurt yourself at work? You would file a workers comp...

Lets clean this joint up: Shoulder Replacement #1 of 3
Admin 2012-06-06 0 Comments
I had right shoulder replacement surgery today due to severe eroding osteoarthritis. It went well and family was all there...

I Woke Up with Lupus and Went to Bed Visually Impaired.
Admin 2012-11-14 0 Comments
I awoke today with Lupus. By the time I went to bed, I had been diagnosed with a very rare...

Living in a tunnel with Usher Syndrome by MollyWatt
Admin 2020-06-22 0 Comments
This is a screenshot that speaks a thousand words. It is a vision simulation to demonstrate how Molly Watt, a...

UCLA Jules Stein: ERG (day two) and CT
Admin 2012-12-05 0 Comments
On our way to UCLA again. The Hubs is taking me and Shawn. I’m doing another visual field and finishing...