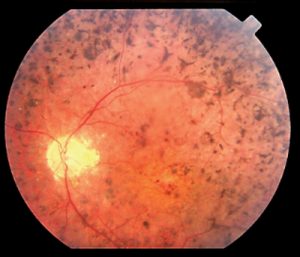 Appt at 930 – saw an ophthalmology technician. She did the basic tests – cover the right eye then the left, read the chart, etc. Then she numbed my eyes, did the thing where they touch your eye with the pen. Then she dilated me and sent us back out to the waiting room. Mom and Dad enjoyed talking to the other patients about politics and how the world was ending, the Indians losing their land, the usual topics. I put my iPod in and listened to audiobooks and then lay down on the couch.

It was nearing lunch time at this point and I was starving. Seemed like they were taking forever. We were discussing where to get food and this nice British couple told mom and dad how to get to Ralph’s across the street. Mom and dad ran off to get food.

Mom and Dad were still gone when I got called into the room. I first saw a Fellow then Dr. Schwartz came in. He calls me Nurse Redding – it’s very sweet. He said that it wasn’t Plaquenil as he didn’t see the deposits caused by Plaquenil I took for years for Lupus.

He said he didn’t know what was going on but was going to run a bunch of tests. He’d start with the easy ones and  then if they don’t tell us what is going on, would progress  to the more “unpleasant” ones. He let me know I may have a lot of testing ahead but he would figure it out. I asked if it was my retinas and he said yes it definitely was but didn’t know what. He said it may be as simple as a vitamin A or D deficiency since I had a gastric bypass and ordered a full vitamin  panel. He wanted a brain CT to rule out neurological issues. He added a spine CT that the neurologist at Stanford ordered.

The team of three came into the room: Dr. Schwartz and his two fellows. They asked me if I had trouble seeing at night and I said yes. “You definitely have some atrophy of the retina but we don’t know what it is yet. It is some type of inherited disease and your mom probably has it too. We will do some genetic testing to see what markers it is related to”. I asked if it was retinitis pigmentosa and he said “Yes-it’s  in that family but we don’t have a diagnosis yet. Give me two weeks to figure this out. I promise you I will.” He wasn’t talking restoring my lost vision anymore; now the goal was just to figure out what the cause is and I fear that restoring the lost vision isn’t going to happen.

They asked mom if she had trouble seeing at night and she said yes so, they said “let’s look at mom right now”. They  put mom into the exam chair, dilated her and said they saw “some” atrophy but not nearly as much as I had. Then they dilated her and sent her upstairs for the same photos I had done.

While mom was getting those done, Dad and I drove to the lab for my blood tests. By the time we got done, it was nearing 5 pm – we had been there since 9am! I was starting to fade fast and desperately needed ice for my shoulder. The phlebotomist had given me a bag of ice (very sweet) but it wasn’t enough and we still had to pick up mom anyway so she walked to Ralphs and we met her there. Mom and Dad got us chicken and other treats from the deli to eat on the road. We drove home and Dad actually got us home pretty quickly considering it was rush hour. Got home around 6:30 and I was wiped out.

TENAYSHUS (Tenacious Blind Girl) is a retired Registered Nurse who needed support following her diagnosis of Retinitis Pigmentosa, one of many conditions that cause low vision. When she could not find a support group, she learned web design to build LowVisionSupportGroup.com to help others impacted with Low Vision. The site was created using accessibility-ready web authoring tools.
Twitter Facebook Linkedin

My Workers Compensation Nightmare
Admin 2001-07-10 0 Comments
Have you ever thought about what would happen if you hurt yourself at work? You would file a workers comp...

Lets clean this joint up: Shoulder Replacement #1 of 3
Admin 2012-06-06 0 Comments
I had right shoulder replacement surgery today due to severe eroding osteoarthritis. It went well and family was all there...

I Woke Up with Lupus and Went to Bed Visually Impaired.
Admin 2012-11-14 0 Comments
I awoke today with Lupus. By the time I went to bed, I had been diagnosed with a very rare...

Interactive Web Accessibility: The New and Improved Mousetrap?
Admin 2020-07-23 0 Comments
I should start off by saying that I am NOT posting this to diminish current assistive technology in use as...

UCLA Jules Stein: ERG (day two) and CT
Admin 2012-12-05 0 Comments
On our way to UCLA again. The Hubs is taking me and Shawn. I’m doing another visual field and finishing...

How FAKE Service Animals HURT the Disabled/Blind Community as well as the Animal.
Admin 2015-08-21 0 Comments
Look what my FeeBee got!!! She is now "officially" a service dog with FULL ACCESS TO ALL PUBLIC PLACES! Her...